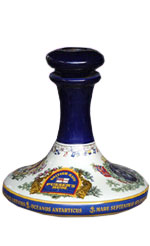 Ships decanters had their beginnings in the early naval sailing ships of the Royal Navy, and it would have been an exception to have found a captain's cabin without one- from the smallest to the largest vessel. The general shape began to develop sometime in the second half of the 18th century, and nothing much is heard of them until a well known British Admiral by the name of Rodney introduced one at a victory celebration on board his flagship following the famous Moonlight Battle and the Battle of the Saints in 1780 and 1782. His decanters had an especially broad base, some of them up to 12-inches in diameter, to ensure stability when used at sea in wardrooms or officers' cabins. It's said that the true test of a ship's decanter is when the shortest distance from the outer edge of the pouring lip to the edge of the base be equal to or greater than the outer circumference of the pouring lip. This was the "Rodney" test.